Enrique
Granados
BACK TO RESULTS TO YOUR CART
Composer
Enrique Granados
Arranger
Douglas McLain
Instrumentation
Symphonic Band.
Duration
05:00
Grade
4
Genre
orchestral
Number
BM637
Score + parts € 99,00
€ 99,00 + add to cart
PREVIEW
Score € 18,00
€ 18,00 + add to cart
MINI-SCORE
PREVIEW MINI-SCORE
Enrique Granados (1867 - 1916) was one of the composers who defined a Spanish nationalistic sound and profoundly affected the style of other Iberian composers. His 12 Danzas Españolas are relatively early works and were published in four books, each containing three dances. When published, they were a sensation and inspired much admiration - and imitation. Though many of them sound like a piano adaptation of a guitar piece, they were, in fact, original piano compositions. In an unusual 'role-reversal', these pieces have been transcribed for the guitar and are as popular on guitar recitals as on piano ones. They have also been transcribed for orchestra, guitar-with-orchestra and countless variations on the same theme. The fifth 'danza' was originally titled simply Andaluza. The term Playera was added by an editor years later. The piece creates a mood of bittersweet melancholy with flashes of a rhapsodic grandeur.
American arranger Douglas Mclain arranged this dance for a Symphonic Windorchestra.
Orchestra
Banda Artística de Merza
Conductor
David Fiuza
/
BACK TO RESULTS TO YOUR CART 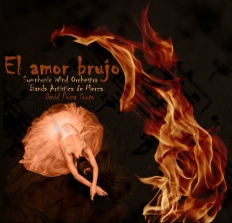