Pablo
de Sarasate
BACK TO RESULTS TO YOUR CART
Composer
Pablo de Sarasate
Arranger
Andreas van Zoelen
Instrumentation
Violin, Symphonic Band.
Duration
09:00
Grade
3
Genre
solo
Number
BM466
Score + parts € 142,00
€ 142,00 + add to cart
PREVIEW
Score € 26,00
€ 26,00 + add to cart
MINI-SCORE
PREVIEW MINI-SCORE
Pablo de Sarasate's 'Zigeunerweisen' (Gypsy Airs) for Violin and Orchestra was written in 1878 and premiered during the same year in Leipzig. It is based on themes of the Roma people, specifically the rhythms of the csárdás. Zigeunerweisen is absolutely Sarasate's most popular composition and a favorite among violin virtuosi, the work has remained a staple on records at least since Sarasate himself (!) recorded it in 1904. It was featured in the 2002 film Together, and it provided both the title and much of the soundtrack for Seijun Suzuki's 1980 film Zigeunerweisen.
/
BACK TO RESULTS TO YOUR CART 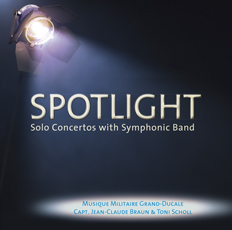